NEPTUNO, THE KING OF HIDROKIDS 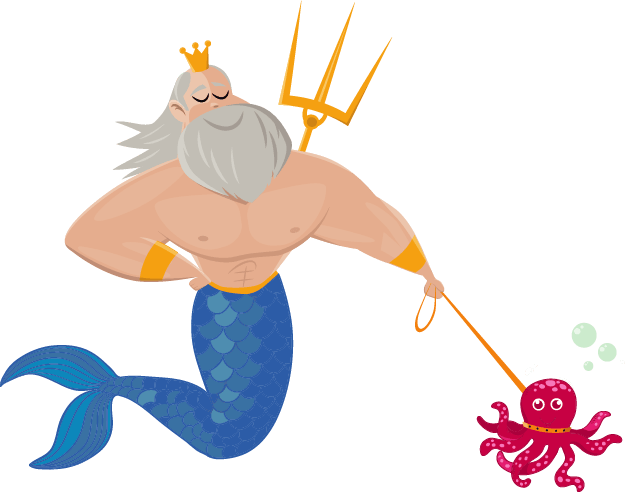 Today we have the honour to introduce the most important member of the aquatic underworld of Hidropark. His name is Neptuno, the king of the seas and the oceans. Neptuno is the firstborn son of God Saturn and the Goddess Ops, brother of Jupiter and Pluton. He was one of the three gods that fought to liberate the world from the tyranny of his father. The sovereignty of the universe was divided between the three brothers, being Neptune the king of the seas, Jupiter the king of heaven and Pluto the king of the underworld. Neptune chose the sea as a dwelling and in the depths, there is a kingdom of golden castles where all kind of living beings live and coexist. The king of the seas is very powerful and with his trident stirs up the waves, disturbs the springs and the fountains anywhere he wants. When he gets angry he cause terrible earthquakes, for this reason nobody tires to provoke him without a good reason. He, his wife Medea and his 3 sons are the royal family. They are in charge of looking after all the members of Hidrokids and the visitors of the park. The mermaids help and protect the smallest so they can enjoy all the fun slides and rides. Medea is the one that controls everything is working in perfect conditions and makes sure that all the grownups can enjoy the fun. Neptune makes sure that they are all doing their work.

When the park closes all the visitors and the workers return to their houses to relax. The only one how remains is the king who enjoys having a walk with his pet, Popi the octopus, and makes sure that no one remains in the park and that everything is left in order for the next day. Neptune locks up and sits down to share a night of stories with his family, looking forward to opening the park to live anther marvellous day in Hidropark.